Runaway Biology: A Call for Conscientious Genome Editing with CRISPR

As scientists and governments methodically deliberate on the best way to regulate CRISPR’s use in society, those seeking fame and fortune plow ahead heedless of the consequences. CRISPR, now a Nobel Prize-winning technology, is a permanent fixture in biological research and clinical medicine. We must take its dire ethical implications, from changing the food we eat to altering human evolution, more seriously.
Science for the People Link to Story

Mutual Aid Does Nothing Alone: A Rebuttal to Joanna Wuest

In her article ‘Mutual Aid Can’t Do It Alone,’ The Nation author Dr. Joanna Wuest alleges that mutual aid is insufficient to support people in (and out of) crisis. She contends that while mutual aid is a useful tool, its efficacy pales in comparison to state programmes. Yet Wuest fails to engage the arguments of mutual aid’s progenitors and proponents.
The Commoner Link to Story

Peasants with Pitchforks: An Interview with Noam Chomsky

Noam Chomsky is an award-winning linguist, political theorist, dissident, and activist. He is currently Professor Emeritus at the Massachusetts Institute of Technology and Laureate Professor of Linguistics at the University of Arizona. Chomsky is a prolific author, having published over one hundred books since 1967 on topics ranging from anarchism to media skepticism.
Science for the People Link to Story

COVID-19 is No Blessing in Disguise

COVID-19 has caused incalculable suffering. For environmentalists, this only portends the coming devastation of climate change. Yet some have argued that for all of the damage the pandemic has incurred, it has also precipitated a recovery in the environment by bringing society to a standstill. This is, to some extent, borne out by the data: the International Renewable Energy Agency has estimated an overall 6-8% reduction in annual emissions for 2020.
The Commoner Link to Story

It wasn’t like the last time I’d visited the British Film Institute. The buildings were all the same, massive cubes of concrete sitting along the bank of the Thames. Their façades were aglow with pink and blue lights, as I remembered them last time, glinting off of the river as we crossed Waterloo Bridge. But it was hard to ignore the general quietness. I’d visited Southbank years ago. I was on a date at the Winter Market just a stone’s throw from the BFI; it was a frigid November evening but the whole riverside was packed. Here I was again, my date from that night now my fiancée, accompanying me to a London Film Festival screening of Bassam Tariq’s "Mogul Mowgli." This time there were hardly any pedestrians milling about despite it being a fairly balmy October evening. I’d been back since for other film screenings but now, as we stood outside the building waiting to be let in—under the new rules, we weren’t allowed to queue in the lobby—I considered how drastically cinemas have changed to accommodate safety recommendations.
RogerEbert.com Link to Story

Planet of the Humans and Climate Change: Muddled, Misinformed or Malevolent?

Planet of the Humans is a 2020 documentary directed by Jeff Gibbs, executive produced by Michael Moore and distributed by Films for Action. The movie purports to reveal the failures of environmentalists for investing time and activism in green technologies which, according to Gibbs, have not fulfilled their promise for a more sustainable future.
Science for the People Link to Story

A CRISPR Moratorium Isn't Enough: We Need a Boycott.

n a garage somewhere in Folkestone in Kent, a grey squirrel named Dot begins to move, blinking and stumbling forward as she comes to life. Dot looks around an impenetrable, foreboding forest, rife with do-it-yourself artistry. A human hand reaches over to adjust her fabric-covered arms just so. The hand belongs to Astrid Goldsmith, an animator whose short film, Squirrel Island, caught my attention at the London Short Film Festival earlier this year. It’s a remarkable dialogue-less effort with an incredible sense of handmade aesthetic, dark humor and perilous narrative thrust. I sat down with Ms. Goldsmith to discuss her movie, from her first screening with Laika Studios to where she plans to take her career next.
Movie Fail Link to Story

Media representation is the process by various media (e.g., television and film) may both depict and symbolize aspects of lived reality. Through its inevitable difference from that lived reality, the process of representation can itself construct meaning. Given this power and the near ubiquity of media in modern culture, the questions of who is represented in media and how they are represented are crucial concerns. The conditions of cultural production have historically limited access to media representation, and this has perpetuated power hierarchies around issues of race, gender, sexuality, and socioeconomic class.
The American Middle Class: An Economic Encyclopedia of Progress and Poverty Link to Story

The Neon Demon aesthetically and narratively distorts its characters to reveal male power structures and how they impact female agency and autonomy.
Movie Fail Link to Story

CRISPR has accelerated basic research and therapeutic development. Its modular nature means it can be adapted to study and potentially treat nearly any genetic disease, including major killers like cancer and sickle cell anemia. The potential for CRISPR to transform medicine with highly precise, potentially one-off treatment options has given hope to those suffering from chronic and debilitating illness.
DESKGEN.com Link to Story

Tomm Moore, Writer/Director of Song of the Sea and The Secret of Kells

There is a certain magic to animation that allows filmmakers to bring our imagination to life. Even live action films depend on these techniques through CGI and other means to help us visualize fantastical versions of our own reality. This outlook drives Tomm Moore, one of the filmmakers behind The Secret of Kells (2009) and Song of the Sea (2014).
Movie Fail Link to Story
View More Stories

I am a PhD candidate in the laboratory of Prof Steve Jackson at the Gurdon Institute, University of Cambridge (https://www.stevejacksonlab.org/).

I am also a freelance film and science journalist. My work has been featured on key entertainment industry websites including RogerEbert.com (www.rogerebert.com/interviews/the-magic-of-magi-douglas-trumbulls-quest-to-explore-a-new-planet-of-cinematic-potential) and ScottFeinberg.com (http://moviefail.com/tag/scottfeinberg.com). I additionally serve as an Editor at Science for the People magazine (https://magazine.scienceforthepeople.org/web-extras/noam-chomsky-interview-covid-19-climate-crisis-class-warfare/).

I brought my experience as an Editor and Staff Writer to The Massachusetts Daily Collegian (http://dailycollegian.com/author/soren-hough) one year later as I began working for the paper as a film and science correspondent. In the spring of 2013, I was hired as Editor of the film section of the paper for the fall of 2013.

In December 2013, I graduated from the Film Studies and Microbiology programs at the University of Massachusetts Amherst.

The cover photo is a screen shot from Tete's wonderful short film, raintown. 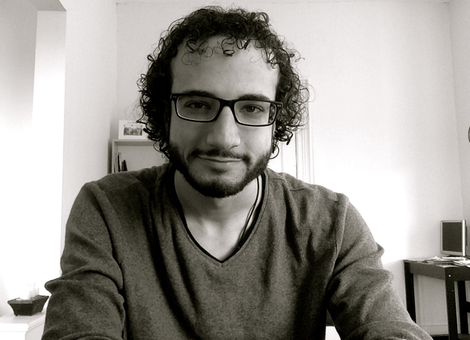